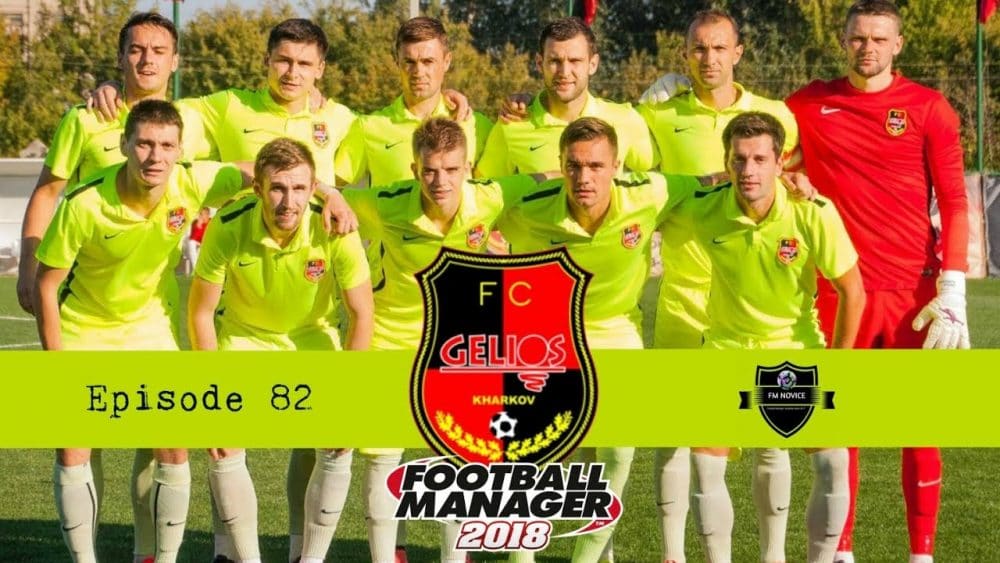 Hello… I’m the FM Novice and I would like to introduce my Gelios Kharkiv Football Manager save to you all – it’s been going since November 2017 and as I write this in March 2018 has seen 79 episodes go live.

My channel can be found here – FM Novice channel!

What is the aim? – Gelios Kharkiv Football Manager 2018 story

The aim of the save is to become a club legend somewhere – I wanted a save where I could remain for many, many years in a nation that I’ve never played before, and only that nation loaded – primarily to keep the game as quick as possible.

I settled on Ukraine as there are only 2 leagues and it met the criteria of being relatively unknown to me.

Within these posts – which I hope to put up weekly (life permitting) – i will take you into a bit more depth around some of my thoughts about the save, recount classic games, look to the future, review some legends – basically anything that I think my audience would be interested in that would be too long for my videos.

The team is Gelios Kharkiv, based near the Russian border in Ukraine (according to Wikipedia so if I’m wrong, please be gentle), I chose them as they had the cleanest history so anything achieved will be my success, only formed 15 years ago in 2002 and they were a professional side as well.

Also liked the fact that they play in yellow – no idea why that mattered but it did.

I also wanted to put the emphasis on developing players through the academy but this club has the worst starting attributes for regens – the lowest ranking for everything, so this wasn’t a hard and fast rule – over the seasons I have played the kids, but the majority of younger players have been found from the other teams scraps – with mixed success.

Season 1 (2017/2018) – Started life in the Ukrainian 1st Division and I set myself the objective of just staying up – the board wanted me to challenge for the playoffs – effectively that meant around the 3rd place at the end of the season – we finished top!

We started very well, but then had a blip in the middle of the season and found ourselves in the top 4 at the winter break – not sure what the players did during this break, but they came back and we went on a lovely run of form – this meant we went into the last game of the season needing 3 points and results to go our way for us to be promoted as champions – thanks to Dmytro Skoblov we managed just that!

I have the team to thank for this (Sergiy Kravchenko hit 30 goals and Denys Sydorenko was brilliant between the sticks) as my signings were rubbish – I made 4 signings during the season, 3 were released at the end and the 4th would have been but he refused to go!

This season we pretty much stayed 10th/11th throughout the season, despite being heavily in debt (we’ve fluctuated between £1m and £2m in the red throughout the save) and ended the season just needing to beat Choronments in the playoffs – at halftime of the 1st game we were 4-0 up – the 2nd half of that match and the 2nd leg were so relaxing!! We brought in a number of signings in the winter break and they massively helped inject some quality although the bank manager wasn’t that pleased! – the fact that Gelvych and Eugene Past are both key members of the squad in season 6 have shown they were value for money.

The hardest part of the save is the finances – you get nothing from the TV companies or any prize money – regardless of what you do in either the league or the cup – so the only money is what you generate yourself and we are a plankton in a big ocean – Shahktar Donestk have a turnover of 53m – most of the rest have around 1m – ours is 200k..

Season 3 (2019/2020) – We broke into the top 6 at the end of the regular season so Europe was a very real possibility, however we were completely out of our depth and finished a distant 6th as we couldn’t compete against the big boys – our points total would put us 11th but we were spared the playoffs as we were in the Promotion Split. The main focus was the Ukrainian Cup which saw a match against Veres in the Semi Final but only 1 team turned up…

Season 4 (2020/2021)– Epic fail at the start of the season – we just never got going and found ourselves massively away from the top 6 and Europe and everything moved towards making sure that we didn’t get dragged into the relegation battle – a change of formation meant we were able to push away from the drop zone and finished in 7th – having to go through the Relegation Split matches helped as we were playing against sides that we should be beating – although nothing is that simple!!

Season 5 (2021/2022)– After missing out on Europe previously, everything was geared towards making that European spot – we ended up 5th and got into the Europa League spot – we ended the season poorly as at one stage 3rd was a real possibility, but I would have taken 5th before a ball was kicked. Goals were genuinely a problem here – our top scorer was Igor Kogut from midfield with 11 and he was the only player in double figures

Season 6 (2022/2023) – Denys Bezbordenko was the main man with 15 goals from 29 matches as we grabbed a 3rd place finish – although admittedly we were a long long way behind the top 2. We had an immense match against FC Midtjylland in the Europa League qualifiers (watch it here ) but our joy was short lived as we crashed out the next round.

Season 7 (2023/2024) – another 3rd place finish but this was a season where we started to move the club on leaps and bounds – we got £3m for Karel Eaassar, an Estonian that scored goals for fun at international level but only mustered 5 in 91 for the club – it didn’t help that i was playing him out of position AND we also got into the group stages of the Europa League so that was another £2m in the account, in fact we reached the Quarter Finals before losing to Inter Milan, which meant that the facilities and coaching staff took a massive upgrade this season and we finally felt that we were moving forward..

Season 8 (2024/2025) – a step up as we qualified for next years Champions League by finishing in 2nd place – country miles behind Shakhtar but you can’t have everything. The Europa League proved to be just a cash cow (several more million pounds into the bank account) before PSG knocked us out in the 2nd knock out round.

Season 9 (2025/2026) – a nearly but not quiet season – we somehow reached the Europa League final and played Ajax (this match has “happened” yet) but enjoy the Semi-Final against AC Milan, we should finish again in 2nd but things are yet to be decided…

The second part of the Ghelios Kharkhiv FM19 story is here!