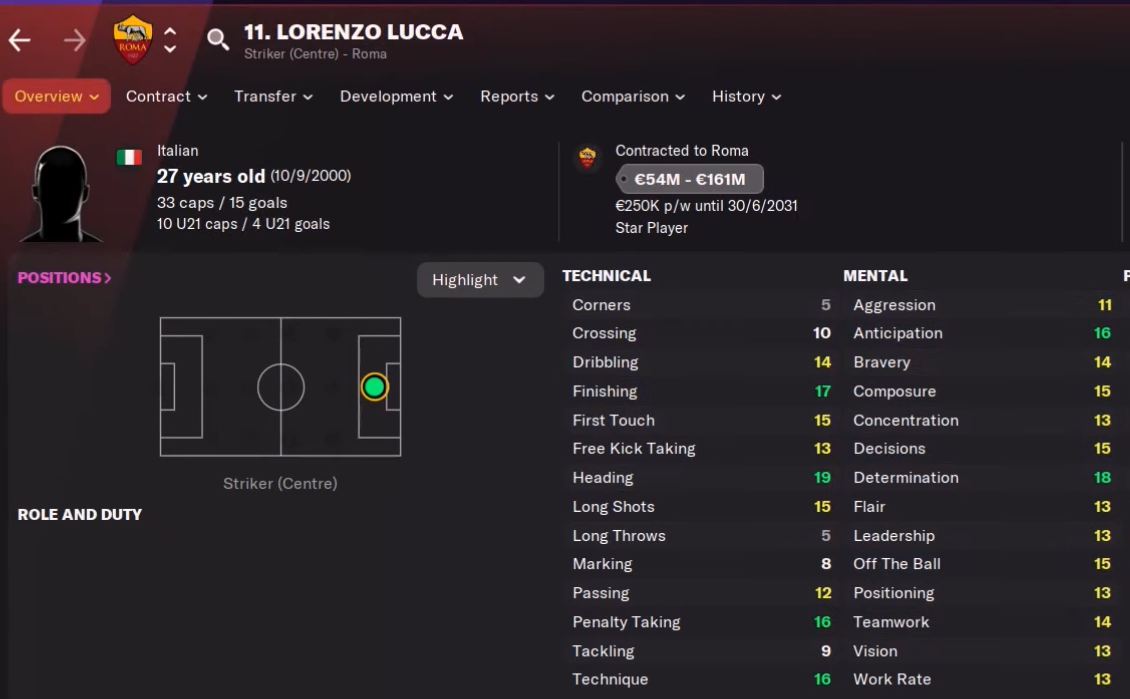 Lorenzo Lucca is a wonderkid on FM22 that I’m sure most of you know about. If you haven’t, you’re missing out on a potential gem, that is really cheap for his ability at the start of your save! That is if you don’t use the January transfer window update, as he is now at Ajax on loan with an option to buy. However, if Ajax decide not to go through with the deal, make sure to snap him up. He is contracted to Serie B side Pisa. We’re going to look at Lorenzo Lucca’s strengths and weaknesses, and his attributes in his prime.

Although there are some negatives, remember Lorenzo Lucca is only 20 years old. This means with the correct training regime and game time, you can develop his weaknesses. Let’s see what he can look like in his prime.

In 2028, you can see Lucca has significantly developed in a wide range of his attributes. His acceleration and pace are now 14 and 15 respectively, which means this is no longer a weak part of his game.

Lucca’s jumping reach has reached the maximum of 20, and his heading is almost there at 19. These attributes alongside being over 2 metres tall means Lucca is undoubtably the best striker in the air!

All of his mental attributes except 1 are above 13, which shows the all-round ability Lucca now has. Let’s take a look at his goalscoring record.

In this simulation, Lucca was signed by Roma after the first season and has been there ever since. His goalscoring record has been excellent in Serie A, including 30 goals in 33 games during the 2023/24 season. He’s also recently finished the 2027/28 season with 31 goals in 32 matches, with an average rating of 7.60.

Lorenzo Lucca goal to game ratio is excellent in almost every season, which shows his high consistency levels. It is extremely important for your striker to have this if you want to compete for trophies.

You can also see that Roma snapped him up in the 2nd season for €11.5 million, and what a bargain Lucca was!

Also make sure to join the FMBrotherhood Facebook group here