6 Best Wonderkid Centre Backs in FM23 you Must Sign! - FMBrotherhood 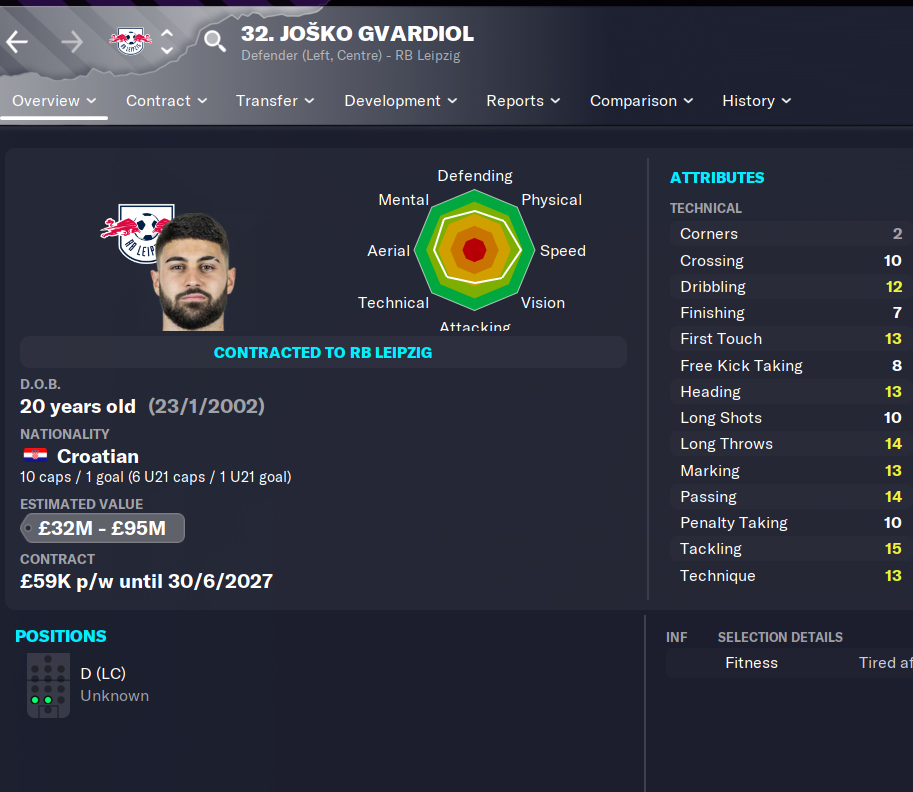 6 Best Wonderkid Centre Backs in FM23 you Must Sign!

If you’re also looking for wonderkid strikers in FM23, check out our article here.

What is an FM23 Wonderkid?

A wonderkid in Football Manager 23 is a player under 20 years old, that has the potential to become one of the best players in the world! However, wonderkids must be given consistent first team football and the correct training regime in order to develop their attributes.

Wisdom Amey is one of the youngest players on this list at only 16 years of age. At such a young age, he’s already extremely tall, and has excellent physical attributes, with 12 agility and stamina being his lowest. Although he clearly has some defensive and mental attributes that need to be developed, he’s got plenty of time to do that.

This wonderkid is available in the first season of your FM23 save for only £2.5 million, which is a bargain for a 16 year old already showing this ability.

Wisdom Amey 10 seasons into your FM23 save has world class physical attributes, especially for a centre back! This means he’s a great option if you use a tactic which involves playing a high defensive line. Amey is also either footed, and is competent at both right back and left back. This makes him an excellent wonderkid that can play all across the whole the back line.

His technical attributes could be a little bit better, which is why he doesn’t feature any higher on this list.

Caleb Okoli impressed while out on loan for Cremonese in Serie B last season. This has given him an opportunity in Atalanta’s first team, and he’s starting games in Serie A at just 20 years of age.

His defensive capabilities have been transferred into FM23, with 14 tackling, 15 marking, and 14 positioning. Like Amey, Okoli also has great physical attributes. However, Okoli is more of a traditional, no-nonsense centre back wonderkid. If you’re looking for a defender that can pass out from the back, you will need to develop Okoli’s passing, technique, and first touch.

If you want to sign this wonderkid in your first Football Manager 2023 season, you’ll need to pay just under £20 million.

In our FM23 simulation, Chelsea decided to sign Caleb Okoli, and you can see why! Okoli’s physical attributes have further developed, making him a force to be reckoned with at the back. He has 16 heading, marking, and tackling, which are great ratings for important attributes for a centre back.

You can see by Okoili’s potential value in 2032, he could definitely be a wonderkid to invest in at the start of your Football Manager 23 save.

Antonio Silva is quite an expensive wonderkid though, costing just under £25 million.

Just like Caleb Okoli, Antonio Silva was also signed up by Chelsea! He has incredible mental attributes, including 18 composure, concentration, and decisions. Silva in his prime has 17 vision, which means he has the ability to pick out an attacker running in behind the opposition’s defence on the counter attack. He’s also managed to accumulate 81 international caps for Portugal, and will likely pass 100 before he retires.

An excellent centre back wonderkid in FM23.

The youngest wonderkid CB on this list, Joao Fonseca plays for Benfica in the Portuguese League. He has 16 determination and 13 work rate, which means he’ll work hard in training and put in a lot of effort in matches. Fonseca has a lot of room to grow, but he has great potential!

You can’t sign Fonseca in the first season of your FM23 save, as he wants to continue his development at Benfica. But make sure to keep an eye on this Football Manager wonderkid CB.

Joao Fonseca in 2032 has some of the best physical attributes amongst the other centre back wonderkids on this list! He also has some top mental attributes such as 17 anticipation, 16 concentration, and 16 positioning. His 16 heading and 17 jumping reach means he’s an aerial threat in both attacking and defending scenarios.

If you can manage to sign up this centre back wonderkid cheaply, he could turn out to be a bargain!

It won’t be a surprise to you to see Josko Gvardiol on this list. He was one of the best centre back wonderkids in FM22, and the same goes for FM23! At 20 years of age, he’s already got great defensive attributes, such as 15 tackling and 13 marking. Gvardiol is also great at playing out from the back, and has the ability to play left back.

However, Josko Gvardiol is extremely expensive. If you want to sign him in the first season of your Football Manager 23 save, he will cost you £63 million!

Josko Gvardiol becomes a fantastic world class centre back in FM23. It’s difficult to pick out a weakness in his defensive game. His 17 pace means he can catch up with fast attackers running in on goal. Gvardiol has also managed to accumulate 118 caps for Croatia by the age of 30, which is an impressive achievement.

If you can afford this centre back wonderkid at some point in your save, you’ll be guaranteed a top class, consistent, centre back.

1. Giorgio Scalvini – The Best Centre Back Wonderkid in FM23

Giorgio Scalvini is the best FM23 centre back wonderkid. In the 21/22 season, he made 18 appearances for Atalanta in Serie A, which is a huge achievement for a teenager! He has great defensive attributes such as 14 marking, tackling, and positioning. Scalvini is also extremely tall, has 15 jumping reach, and 13 heading.

The best centre back wonderkid in football manager 23 costs you £34 million in your first season. An expensive wonderkid, but certainly worth it.

Caleb Okoli who also plays for Atalanta, features on this list too. So if you’re looking to start a save with Atalanta in FM23, you’ve already got 2 excellent wonderkid centre backs to build your team around.

Giorgio Scalvini in FM23 has the potential to become the best CB in the game. This wonderkid has some world class defensive attributes, such as 18 anticipation, 18 concentration, and 16 marking. He’s also a fast centre back, and has the passing ability to play out from the back. He’s the perfect wonderkid centre back.

Final Thoughts on Centre Back Wonderkids in FM23

That’s the end of our list of the best wonderkid centre backs in football manager 2023. If you think there’s any wonderkids that we missed, comment to let us know!