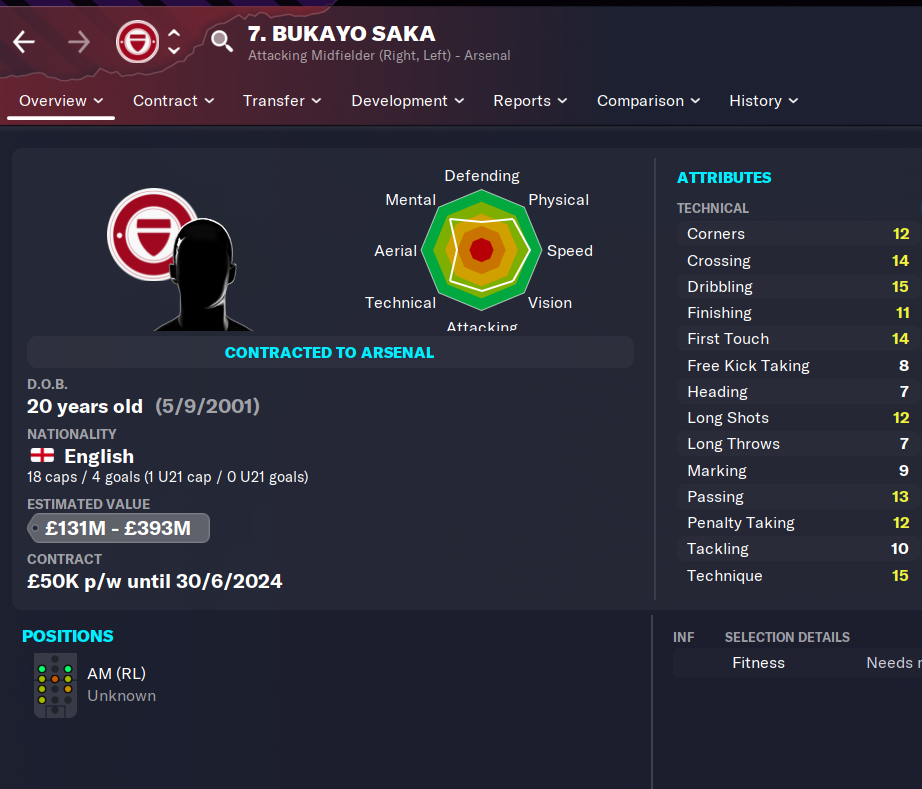 Right wingers can be one of the most exciting players in Football Manager. Tricky, pacey wingers, that can put in a good cross, or cut inside and shoot, can increase your chances of winning trophies in FM23. At FMBrotherhood, we’ve gone 10 seasons into the future to find the best FM23 right winger wonderkids. We’ve found 7 of the best wonderkid right wingers for you to sign!

If you’re looking for the best wonderkid centre backs in FM23, check out our article here.

What is an FM23 Wonderkid?

A wonderkid in Football Manager 2023 is a player under 20 years of age at the start of your save, that has the potential ability to become one of the best players in the world! However, for right winger wonderkids to reach their potential, they must be given regular first team football, and a high-quality training regime.

Nico Williams starts off our list of the best right winger wonderkids in Football Manager 2023. At just 19 years of age, he’s got well-rounded mental attributes, including 15 determination, and 15 off the ball movement. Williams also has good pace, crossing, and finishing ability, which makes him effective in the final third. You can see why he is a right winger wonderkid.

If you want to sign Nico Williams in your first season, he will cost you £43 million, which is his release clause.

In our simulation, Nico Williams stayed at Athletic Bilbao and become a club icon! He was able to consistently get 20 goals + assists throughout his career. His mental attributes have developed even further, with all attributes being at least 13, except from his 9 aggression. Williams is also a versatile wonderkid, having the ability to play on the left wing, and at striker.

A great FM23 right winger wonderkid you should definitely keep an eye on in your save. However, you’ll see from the rest of this list that there’s even better options.

Cole Palmer hasn’t played many first team appearances for Manchester City, but it’s believed he’s going to burst onto the scene in the near future. Palmer has some brilliant technical abilities such as 14 dribbling, and 16 technique. He’s a versatile winger, and can also play in the central attacking midfield position. However, we feel Palmer would be best utilised as a right winger.

If you want to sign this wonderkid right winger in the first season of your FM23 save, he’ll cost you £32 million.

Cole Palmer has the potential ability to develop into a great right winger in your Football Manager 23 save. He also has the player trait to get into the opposition area, which means he can get on the end of crosses coming in from the left side of the football pitch. Palmer’s 15 passing, 17 technique, and 16 vision gives him the ability to play excellent through balls to other attackers when on the counter-attack.

You won’t be surprised to hear there’s more English wonderkid right wingers on this list.

Angelo is the youngest wonderkid right winger on this list. Some of you may have used him on FM22, and he still has brilliant potential in FM23! His standout attributes are his 15 dribbling, 15 flair, and 14 agility, typical Brazilian winger strengths. His physical attributes are excellent for just 17 years old.

Angelo is the cheapest wonderkid right winger on this list, only costing £12.5 million if you want to sign him in your first season.

After 10 seasons, you can see that Angelo becomes a top class right winger. His mental attributes have seen some great development, such as 18 anticipation, 17 composure, and 16 determination. Since he moved to Athletico Madrid, Angelo managed to maintain an average rating of at least 7.15, which shows he has the ability to perform at the highest level consistently.

In our simulation, Athletico Madrid signed Angelo cheaply, and managed to sell him to Manchester City for £122 million! Make sure to invest in this wonderkid right winger before it’s too late.

Michael Olise is the second FM23 wonderkid right winger on this list so far that plays in the English Premier League. He’s a fantastic talent with 16 dribbling, 15 passing, and 16 flair. In real life, Crystal Palace have recently removed a £35 million release clause that was in Olise’s contract, and you can see why!

According to Football Manager 2023, Olise now has a release clause of £50 million. However, this can only be activated if the buying club is playing in a continental competition, such as the Champions League.

Michael Olise is one of the most technically gifted players on this list. He has 16 crossing, passing, technique, and 18 vision! This means he’s able to cut back onto his left foot from the right wing, and put in an excellent cross.

In our simulation, Manchester United signed Olise in 2024, and he went on to become club captain and a club icon.

You can see why he’s one of the best FM23 right winger wonderkids.

Harvey Elliot was playing brilliantly for Liverpool in the 2021/22 season before he picked up a long-term injury. However, the injury hasn’t hindered his FM23 attributes. At just 19 years of age, he has 16 determination, 16 team work, and 17 work rate. This are all fundamental attributes for a player to be successful in Football Manager 23, and Elliot is fantastic in all areas.

Harvey Elliot has just signed a new contract with Liverpool, which means you’ll have to wait until your second season if you want to sign him. We’re pretty certain he’ll cost you at least £50 million too!

Harvey Elliot is a brilliant inverted right winger wonderkid in FM23, and has the player trait of cutting inside from the right wing. He also has 5 mental attributes over 17.

After some successful seasons at Liverpool, PSG signed Elliot for a huge £128 million fee. Looking at his attributes though, he’s definitely worth the money.

Yeremy Pino takes second place on our list of the best right winger wonderkids in FM23. He’s got all the great attributes you would look for in a winger, such as 16 dribbling, 16 technique, and 16 flair. He’s one of the best Spanish wonderkids in Football Manager 2023.

If you want to sign this wonderkid right winger in the first season of your FM23 save, you’ll have to pay his £69 million release clause!

Yeremy Pino has managed to accumulate 100 caps for Spain, which is extremely impressive considering the competition for places in the Spanish national team. His standout attributes in 2032 are 18 agility, 18 flair, and 17 composure. The media describe Pino as a “legendary winger” which shows his world class potential.

You can see why Yeremy Pino is second on our list of best right winger wonderkids in Football Manager 2023.

Bukayo Saka already has some quality attributes at just 20 years of age. He has rapid acceleration, and fantastic mental attributes. Saka definitely has the best current ability on this wonderkid wingers list. He also features in our best wonderkids on FM23 article.

Arsenal don’t seem to be interested in selling Saka in the first FM23 season, even if you offer over £200 million!

That’s the end of our list of the 7 best wonderkid right wingers in Football Manager 2023. 4 of the players on the list are eligible to play for England, so their right wing spot is going to be competitive in the future! If you think there’s any wonderkids that we missed, comment to let us know!