10 Best African Wonderkids in FM23 You Must Sign! - FMBrotherhood 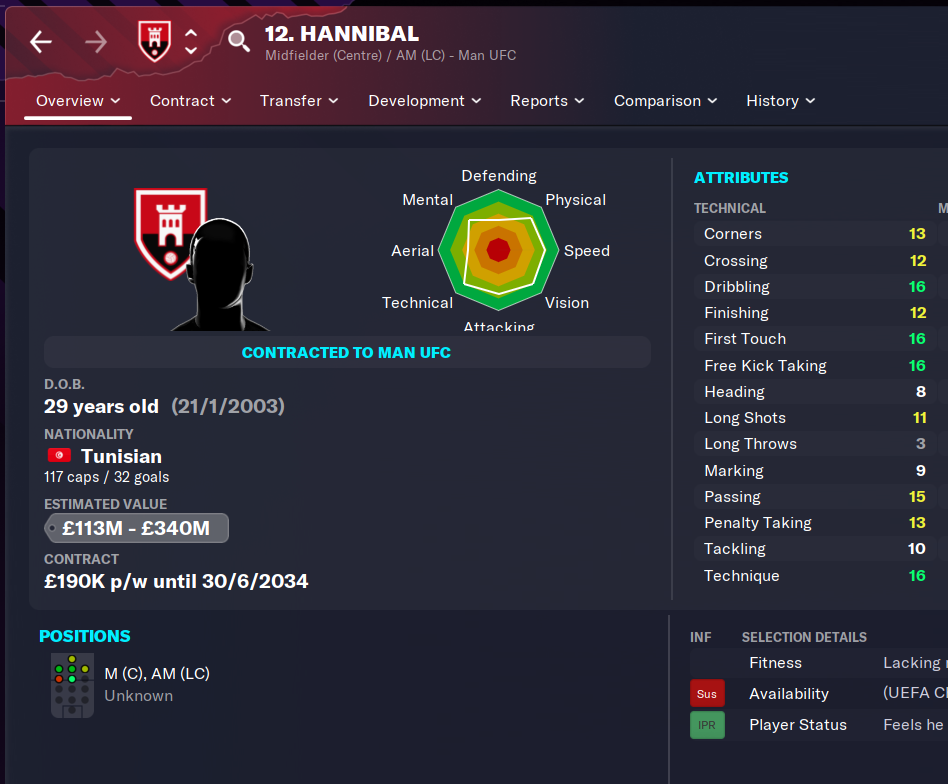 That’s why we’ve gone 10 seasons into the future to find out the 10 best African wonderkids FM23 has to offer!

Check out our last article on the best lower league wonderkids in FM23 here.

If you’re not familiar with what a wonderkid is in Football Manager, it’s a young player that has the potential ability to improve their attributes and become one of the best players in the game in their prime. The players on our list are African wonderkids in FM23 under the age of 20 when you begin your save.

The first player on our list of the best African wonderkids FM23 has to offer is Ez Abde. He’s a 20 year old winger on loan at Athletico Pamplona from FC Barcelona.

He’s a pacey winger with some great technical attributes, such as 13 first touch, 15 dribbling, and 13 technique.

As Abde is on loan in your first FM23 season, you’ll have to wait at least one year until you can make an offer to sign him.

At 30 years of age, Abde has 112 caps for Morocco, which is seriously impressive! In his prime, Abde’s standout attributes are 16 flair, 15 pace, and 18 agility.

This African wonderkid is worth over £80 million in his prime, so he could definitely be worth the investment in your FM23 save.

You may notice that Football Manager have Agoume’s nationality declared as France. However, he’s eligible to play for Cameroon, and does so in our simulation.

This African wonderkid has well rounded physical attributes, including 15 stamina, 14 balance, and 17 natural fitness. Having players with a high natural fitness attribute is important, as it means their other attributes deteriorate at a slower rate.

Just like Abde, Agoume is on loan in the first Fm23 season, so you can’t sign him straight away.

This African wonderkid went on to make 66 appearances for Cameroon by the age of 30. He also plays for Champions League side OGC Nice.

In his prime, Agoume has great vision, passing, and technique. These attributes allow him to dictate the play from a deep position.

In our simulation, Agoume left Inter Milan on a free transfer. You might also be able to sign him cheaply in your save too!

Datro Fofana is an exciting wonderkid striker who’s scoring goals for fun in real life. This has earned him a move to Chelsea in real life. This means you’ll have to sign Fofana before the FM23 Winter Update which usually happens around March time.

Fofana is a rapid and physical striker, with raw technical and mental attributes that will make him a great striker if they improve.

This African wonderkid striker is available to sign for just £5 million! A great deal for a player with Fofana’s potential.

In his prime, Datro Fofana is an incredible goal machine! He’s managed to score 50 goals in 92 appearances for his African country, and scored 27 goals in 29 games for AS Monaco in a season. Barcelona have now signed this FM23 African wonderkid.

Datro Fofana also has the ability to play on the wing, but after seeing his impressive goal scoring record, you must play him as a striker.

After signing for Manchester United a couple of years ago, Amad Diallo has had limited game time. He’s starting to show his ability on loan at Sunderland in the Sky Bet Championship.

Amad Diallo has fantastic mental attributes in 2032, including 17 vision, 16 composure, and 17 determination. He’s scored over 20 goals for Ivory Coast, which is impressive for a winger.

Amad Diallo only has 9 strength, so it can sometimes be easy for defenders to get the ball off him. He also only has 2 tackling, so I wouldn’t rely on him defensively.

An excellent African wonderkid FM23 has to offer.

Although Football Manager have Faustino Anjorin as English, he’s eligible to play for Nigeria, and goes on to do so in our simulation.

Anjorin is an attacking midfielder with well rounded physical attributes, such as 15 balance, 14 pace, and 14 strength.

As he’s on loan at Huddersfield from Chelsea, you’re unable to sign Anjorin in your first FM23 season.

Anjorin has made 56 appearances for Nigeria, scoring 12 goals in the process. He also moved to Brentford for £58 million! This shows that if you’re able to sign this young African wonderkid, you could make a large profit.

Faustino Anjorin’s physical attributes stand out in 2032, with his agility increasing from 9 to 14, and balance from 15 to 17.

Making the top 5 in our list of the best African wonderkids in FM23 is Angolan winger Zito. This pacey winger plays in Serie B for Cagliari, so if you play in a better division, it should be quite easy to persuade him to sign for you.

Zito is available for just under £8 million, which could turn out to be a great investment.

In his prime, this FM23 African wonderkid has scored almost a goal every 2 games for Angola! Zito has also sealed a move to Athletico Madrid, and is now worth over £50 million.

Zito’s mental attributes have seen some great development, with his vision has increasing from 12 to 16, and his composure from 12 to 15.

Armel Bella-Kotchap joined Southampton in the summer of 2022, and has impressed in the Premier League. Bella-Kotchap is eligible to represent Cameroon on the international stage, and does so in our FM23 simulation.

Because this African wonderkid just signed for Southampton, you’ll have to wait one season before trying to sign him in your FM23 save.

This African wonderkid CB has fantastic physical attributes, including 16 strength, pace, and jumping reach. Having centre backs with high pace and acceleration attributes allow you to play a higher defensive line in FM23.

Armel Bella-Kotchap made 55 appearances for Cameroon in our Football Manager 2023 simulation.

If you thought Bella-Kotchap had good physical attributes in his prime, take a look at Abakar Sylla’s at just 19 years of age! Sylla also has strong defensive attributes, including 14 marking, 16 bravery, and 15 heading. However, some of his other mental and technical attributes need to be developed for him to become a world class African wonderkid in FM23.

Abakar Sylla is available for just £6 million! This is definitely a wonderkid bargain.

Sylla has made 80 appearances for Ivory Coast, and has 10 attributes rated at least 16! He has the potential to become the best African centre back in FM23.

Abakar Sylla has been able to work on a lot of his weaknesses to improve his overall game. This African wonderkid has everything you want in a centre back.

Just missing out on the number 1 spot on our list of the best African wonderkids in FM23 is Ilaix Moriba. He’s technically brilliant, with 14 dribbling, 16 technique, and 15 first touch.

Moriba is on loan at Valencia from RB Leipzig, so you can’t sign him in your first FM23 season.

This African wonderkid is world class in 2032. His physical attributes are well rounded, with his lowest attribute being 12 teamwork and work rate.

Moriba has scored 30 goals in 88 appearances for Guinea, which is a fantastic record for a central midfielder! If you can afford him, you should definitely look to sign this FM23 African wonderkid.

The best African wonderkid FM23 has to offer is Manchester United player Hannibal. The Tunisian wonderkid already has 16 caps as a teenager, and has impressed on loan at Sky Bet Championship side Birmingham City.

You can see why Hannibal is the best FM23 African wonderkid. He has 14 attributes above the rating of 16, which shows he’s exceptional in a lot of areas in his game.

He has made over 100 appearances for Tunisia, scoring an impressive 32 goals, and is also worth over £100 million.

Summary of the Best African Wonderkids in FM23

If you’re looking for more FM23 wonderkids, check out our article on wonderkid left wingers.